It is only a matter of weeks before the final season of Game of Thrones hits our screens.  Here at BMT we are rather excited to say the least, especially after seeing HBOs official cryptical teaser (see below).

The Game of Thrones season 8 release date is April 14, 2019 which is just 8 weeks away.  All the filming for the show was wrapped up in July of last year.  The directors for this final season are David Benioff & D.B. Weiss, Miguel Sapochnik and David Nutter.

This final season consists of just six episodes which means each episode is surely going to pack a punch!  Last week HBO released these stunning images:

You can see the rest of the images on HBOs official blog:

Below is HBO’s official teaser which hints at what’s to come. Like most of the other teasers its more of a promotional video aimed at provoking a stir and getting people talking about what it all means. The teaser below shows Jon, Sansa, and Arya walking through the crypts of Winterfell, past the statues of their passed family only to discover statues of themselves. Does this mean all three are destined to die? Surely not! We are still waiting for the Jon and Arya reunion.  Also, as Jon walked past Lyannas statue, a feather fell from her hand.  It looks very much like the very same feather that Robert Baratheon put in her statue’s hand in the very first episode. We will have to wait and see what this means but it’s all very cryptic.

Remember that Jon Snow is actually the legitimate son of Rhaegar Targaryen and Lyanna Stark.  Jon surely will learn of this early on in the season and the fact that he is the legitimate heir to the Targaryen dynasty. But what will he do?  Will this bring more incest?  What about the problem of Daenerys’ lineage. She is supposedly infertile.  Remember the romantic boat scene when Daenerys told Jon “the dragons are my children, they’re the only children I’ll ever have — do you understand?” It’s all rather exciting an we will have to wait and see the outcome.  HBO have done a great job at getting the hype going ready for its release date.

Take a look at the teaser below:

For those who can’t wait for the new season might like to book our Winterfell Game of Thrones filming location tour. You can discuss the cryptic trailer for the new season and debate what you think is in store with other Game of Thrones fans. The tour starts in Belfast and takes fans to a number of iconic locations which were filmed in the south. The guide for the tour actually appeared in the show, so you will learn some inside knowledge which can only be found on this tour.

The first stop on the tour is King Robb’s camp. Inch Abbey is a large 12th century ruined monastic site in a picturesque location. This was the location for the scene where King Robb ‘The young wolf’ was crowned ‘The King of the North’ amongst others.

Tollymore Forest is another beautiful location on tour. It’s actually Ireland’s oldest pine forest. Here a number of scenes where filmed including the mysterious Wildling massacre by the White Walkers from episode 1.

The finale of the tour is of course Winterfell. The farmyard at Castle Ward was used as the location of Winterfell. One of the highlights of the tour is getting your photograph taken with the beautiful Direwolf pups seen in the show.

If you’re a serious fan of the show then this is the tour to book. It runs every Saturday at 9am with private tours also available. More dates and information can be found on the page below; 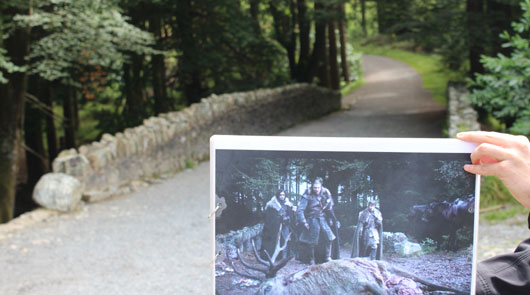