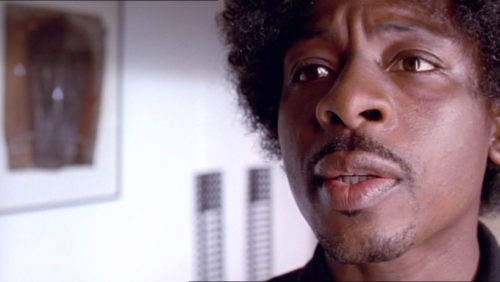 Brit Movie Tours is pleased to announce a new celebrity tour guide for our Krays Gangster London Tour. Vas Blackwood aka Rory Breaker from Lock, Stock And Two Smoking Barrels will be taking over from Stephen Marcus on the 14th October.

Working actor Stephen Marcus will guide his last tour on the 7th October. We would like to take this opportunity to thank him for doing such a great job over the past few years. We wish him well for his future and look forward to seeing him on our screens soon.

His replacement Vas Blackwood worked with Stephen on Lock, Stock. Who can forget the scene where Rory calls Nick the Greek in for an explanation due to his weed being stolen. Rory issues lots of threats involving Nick being killed. There was also the scene where Bacon ask him to turn the television down for Rory to turn around and stonily reply “No”.

Vas was born in London in 1962 and has been an actor since the early 80’s. He played Lenny Henry’s sidekick Winston Churchill in The Lenny Henry Show in 1987 and David Sinclair in Casualty from 1996 to 1997. He has been in a number of films including Mean Machine in 2001, 9 Dead Gay Guys in 2002 and Creep in 2004. He also made an appearance as Lennox Gilbey in Only Fools and Horses.

We think Vas is a great replacement and believe he will do a grand job. Like Marcus he too has rubbed shoulders with some of London’s ex-gangsters and their associates, including Freddie Foreman, Dave Courtney, Barbara Windsor and gangster-turned-actor, Lenny McLean. Like his predecessor he will share true stories and anecdotes at each location on the tour. We would like to welcome Vas to the team and hope he enjoys guiding our Gangster tour over the next few months.