‘Jack the Ripper’ manuscript to be published worldwide 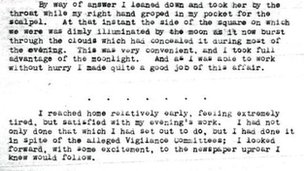 A manuscript possibly written by Victorian serial killer Jack the Ripper is to be published worldwide.

The document was unearthed at the Montacute TV and Radio museum, Somerset, in October 2009 among the possessions of children’s author SG Hulme Beaman.

It is thought to have been written in the 1920s and is entitled The Autobiography of James Carnac.

Ripper historian Paul Begg has read the whole manuscript and said it could not be dismissed as a piece of fiction as “you find all sorts of questions and lots of niggles” about its content and provenance.

The manuscript is the first time the name James Carnac has been linked to Jack the Ripper – although no public records have yet confirmed whether Carnac existed.

Other suspects have been put forward in the past by Ripper historians, but to date his true identity has never been discovered.

To have a taste of  how an Autumn of Terror in 1888 can still chill to the bone to this very day just join the 2 1/2 hour Jack the Ripper Tour.