Where is Love Actually Filmed?

Love Actually was filmed mainly in and around London, but some scenes were filmed in Surrey and France. The hit British Christmas-themed romantic comedy film written and directed by Richard Curtis and has become a modern-day Christmas Classic.

The location of where Liam Neeson’s had the heart-to-heart with his son was filmed on the Queen’s Walk which is a path on Gabriel’s Wharf, South Bank, London. Just in front of the Riviera Restaurant outside 56 Upper Ground, you’ll find the bench.  This was the location of the tear-jerking scene where Daniel’s son reveals that the pain and stress he is going through is the fact that he is in love.

All the internal filming scenes of 10 Downing Street were filmed at Shepperton Studios.

The most photographed front door in all of Britain is 10 Downing Street, the official address for British prime ministers since 1735.  Today you can’t walk down Downing Street, however the famous number 10 can be seen when looking through the gates from Whitehall:

The pretty Anglican church dates back to the 1730s.  The couple walk down the aisle to ‘All You Need is Love’ by The Beatles with the ceremony being filmed by best man and love-struck Mark.

Mark Declares his Love to Juliet 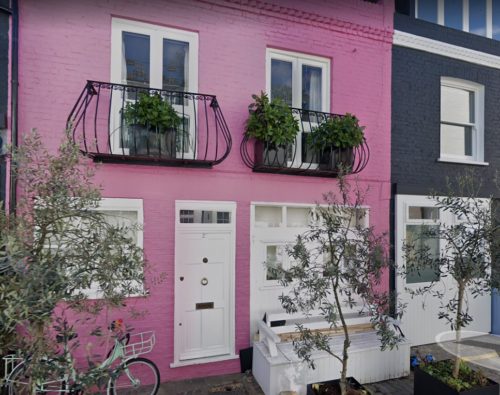 The house where Jamie discovers his girlfriend cheating was located at 2a Blenheim Road, Turnham Green, London:

The Christmas Concert where Natalie sneaks the Prime Minister into a school  to watch the concert from back stage was filmed at Elliott School, in Pullman Gardens, London, SW15 3DG.  Today the school has a new name is is called Ark Putney Academy:

Here at Brit Movie Tours we offer a number of Rom Com tours which take you to locations from films such as Love Actually.  The details of our 2 and a half Love Actually Tour with other Rom Com sites can be found here.