The now iconic romantic comedy film was written by Richard Curtis, directed by Roger Michell and produced by Duncan Kenworthy. It was released in May 1999 and was the highest-grossing British film released that year. It won a number of awards including a BAFTA and to-date has made nearly 400 million dollars.

The idea of a normal person going out with a really famous person was apparently loosely based on a real story where one of Richards friends fell in love with an extremely famous person.  As Curtis lived in the area, he thought it was a perfect place to shoot the film.  Today its known as a cosmopolitan neighbourhood, hosting the annual Notting Hill Carnival and Portobello Road Market that attracts tourists from around the world.

Where was Notting hill filmed?

142 Portobello Road was used as the location for the Travel Bookshop, but there was never a book shop there. Today it’s a gift shop but on the side of the building is a sign saying ‘The Travel Book Shop’. This is just what the owners had made up to cash in on the fact that the location was used as Notting Hill bookstore. This is what the shop looks like today:

The interior shots of the store were done in Shepperton Studios, however the book shop was inspired by The Notting Hill Bookshop at 13 Blenheim Crescent, just around the corner. The shop opened in 1979 and specialised in only travel books. Since the release of the film the interest in the shop boomed and today it is still a book shop but with a more broadened stock of books. There is still a large travel section though.

William Thacker’s flat with its famous blue door can be found at London W11 1EH.  The interior of the flat again was filmed in studio and nothing like on the film, apparently it was a home once owned by Richard Curtis.

Today the flat is valued at around £5 million. The original blue door is long gone as it was auctioned off for charity.  A black replacement door was in situ for a while but was painted blue to keep the tourists happy. Today it is one of the most famous doors in the world.  The Notting Hill blue door address is 280 Westbourne Park Rd, London W11 1EH:

The cinema where William watched the sci-fi movie ‘Helix’ that starred Anna Scott was The Coronet which can be found at 103 Notting Hill Gate.

Will and Anna go on a date at the Nobu restaurant at 19 Old Park Ln, Mayfair.  Anna stands up to confront some rude tourists she over hears talking about her.

The location of Anna’s press conference was filmed at the Lancaster room in the Savoy.

Kenwood House in Hampstead Heath is the Henry James film location they used in the film. It is a former stately home which is open to the public. For more information about opening times visit: https://www.english-heritage.org.uk/visit/places/kenwood/

William’s friend Max had a struggling restaurant which the location of can be found on the corner of Golborne Road and Bevington Road. Today it’s a gift and card shop called ‘Portfolio’.

The private gardens where Anna and William broke into can be found at Rosmead Gardens. However, they are still private and locked so you can’t go inside, but you can see the entrance though and reenact the funny whoops-a-daisy scene.  This is also the location of the bench location.  The actual bench on was simply a prop for the film and has long gone.

The book William was reading at the end of the movie in the park is ‘Captain Corelli’s Mandolin’.  Rumors are that this was going to be which was going be Roger Michell’s next film although he was taken ill before filming started.

Apparently Rhys Ifans really got into his character Spike by not bathing much during the filming.  I am sure this was not so fun for the rest of the cast!

The name Portobello (from the famous Portobello Road) actually honours the capture of Puerto Bello from the Spaniards in 1739.

For those that haven’t seen the film, ermm where have you been? It’s a story about a Notting Hill bookstore owner who falls in love with a well-known American actress. The Notting Hill cast stars Julia Roberts who plays the Hollywood actress Anna Scott, and Hugh Grant plays William Thacker the book store owner. Great characters include Williams scruffy house mate Spike who was played brilliantly by Rhys Ifans.  Hugh Bonneville, Emma Chambers, James Dreyfus, Tim McInnerny and Gina McKee make up the rest of the cast all with brilliant roles and each with exceptional performances.

The movie has a number of great lines which melted the hearts of many fans. Anna asks Will he she can stay a while, he replied “stay forever. Another scene shows Will telling Anna “It’s as if I have taken love heroin, and now I can never have it again.” One of the most memorable scenes and lines is where Anna tells Will “I’m just a girl, standing in front of a boy, asking him to love her”.
One hilarious scene is where William Thacker tells Spike “I’ve opened Pandora’s Box”, Spike replies “I knew a girl named Pandora in High school once . . . Never did see her box though!”
In the car scene Bernie says “James Bond didn’t have to deal with this sorta shit” as he tries to negotiate London traffic.

Notting Hill is a great part of London to visit regardless of being a Notting Hill film fan. The area is vibrant colourful and trendy with a number of shops and cafes as well as high end Notting Hill restaurants.  Antiques and vintage fashion can be found in its busy market which is open most days. Thousands turn up for its annual carnival.

Those wanting to visit the area, the Notting hill postcode is W11 2PA.

Here at Brit Movie Tours we offer a comprehensive Notting Hill walking tour.  Your local guide will give you the background and history of the Notting Hill area as well as all the inside information about the filming locations on tour. You will be shown places and learn facts that are not on any other tour. You will learn all about Rachman landlord controversy.  He became notorious for his exploitation of his tenants in the late 50’s and early 60’s. The word “Rachmanism” entering the Oxford English Dictionary as a synonym for the exploitation and intimidation of tenants. You will also be shown places such as recording studios where legendary tracks were made and the location of where Jimi Hendrix took his fatal overdose.  Our tour is great for those that want to learn about the whole area as well as going to all the main filming locations from the movie.

Those only interested in the Notting Hill filming locations will get the chance to post for a picture in front of the ‘blue door’ and visit the Travel Bookshop that was the inspiration for film. There are a number of celebrities that have made Notting Hill their home and our guide will point them out. The tour is a great way to see the area and enjoy the hustle and bustle of one of the most famous street markets in the world. Our guide will happily recommend all the best places to eat and drink. 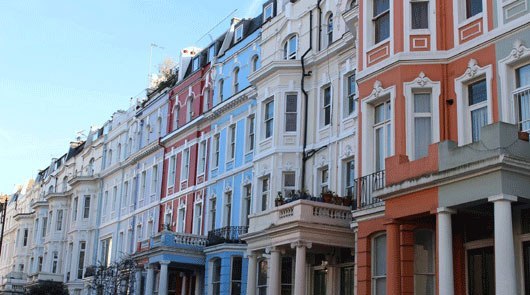