The real Peaky Blinders was the name given to gangs that ruled the industrialised areas of Birmingham in the late 19th century.  From 1870’s onward, Birmingham was sinking into extreme poverty and crime was rife. Gangs were formed by youths wanting to claim ownership of certain areas in Birmingham. Postcode wars would see fights break out and sometimes so seriously many involved would die. The Wainwright Street Gang, Whitehouse Street gang and Ten Arches Gang are a number of gangs which lasted for over 30 years. English historian Professor Chinn revealed in his book about the Peaky Blinders that these smaller group of gangs came together to form the Aston Sloggers and went on to fight the Nechells Sloggers. By 1895 these gangs were being referred to by the press as Peaky Blinders or Sloggers. Their crimes included generalized violence theft, mugging, illegal betting, protection racketeering, and dealing in black-market goods.

The TV series is set in the 1920’s whereas the really Peaky Blinders were around in the 1890’s. The Birmingham born writer of Peaky Blinders Steven Knight came up with the idea for the drama years ago and is based on stories told to him by his parents who grew up in Small Heath Birmingham.

Many believe the name ‘Peaky Blinders’ derived from the gang stitching razor blades into their flat caps and using them as weapons as seen in the TV series.  However Professor Carl Chinn believes this is an unlikely scenario as razor blades had only just emerged and were a luxury and expensive item. ‘Peakys’ was a common nickname for popular flat caps with peaks which the gangs did ware. The gang were however the more stylish of gangs at the time. They dressed distinctively with peaked baps, cravats, bell-bottom trousers and silk scarves tied around their necks. This set them apart from other gangs such as the Birmingham Boys also known as the Brummagem Gang. 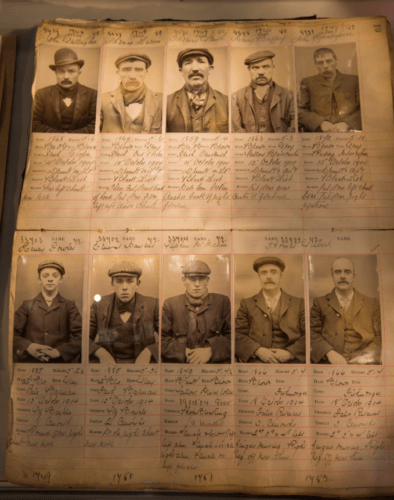 There was no real Tommy Shelby back in the day. It is still being debated whether Peaky Blinders were a single gang or a local Birmingham term for the gangs. The author of The Gangs of Birmingham Philip Gooderson, states that the Peaky Blinders originated as one gang but the term later became generic.  Details of the Peaky Blinders’ crimes are preserved in the West Midlands Police Museum showing images of Harry Fowler, Ernest Bayles, Stephen McHickie and Thomas Gilbert who are today referred to as the real peaky blinders.  Many gang members were as young as 12 such as baby faced Charles Lambourne and David Taylor 13.  The gang were referred to by court reports at the time as ‘foul mouthed young men who stalk the streets in drunken groups, insulting and mugging passers-by.’ But is was the older gang members who ruled the roost as it were, mainly Stephen McHickie, Harry Fowler and Tom Gilbert. Today the names of the gang members are all but forgotten, however their reputations are cemented in Birmingham’s history.  It is only recently the gang are being remembered thanks to the hit BBC drama Peaky Blinders.

To learn more about the gangs read Carl Chinn’s book, The Real Peaky Blinders and The Gangs of Birmingham by Philip Gooderson.  Records of the gang members and their crimes are preserved in Sparkhill’s West Midlands Police Museum.

Despite the fact that the drama is set in 1920s Birmingham, very little of Peaky Blinders is actually filmed in the city. The Black Country Living Museum  was used to recreate the scrap metal yard of Charlie Strong and where Tommy Shelby stored his illicit goods and kept his race horse. Also the blacksmith’s forge was the location used for filming the dramatic scene when Tommy was forced to shoot dead an IRA sympathiser in the first episode of the second series. The rest of Peaky Blinders is filmed in Manchester, Leeds, Bradford but mainly Liverpool. Interestingly the street where the Shelby’s live, which is supposed to represent a terraced street in Small Heath, was actually the street where Ringo Starr from the Beatles grew up in Liverpool.

Peaky Blinders is currently on a break between its fifth and sixth season. However if you can’t get enough of Peaky Blinders and can’t wait that long, why not join us on tour and hear lots anecdotes about the making of all three series of the show. You can visit this street on our very own Peaky Blinders Tour and also visit more than 10 filming locations in and around Liverpool. The tour lasts for 6 hours and costs £60, private and group tours available.. Click here to book for Peaky Blinders Tour

For those that haven’t watch the show it centers around the rise of Birmingham-based gang leader Tommy Shelby and his family and highlights the lengths that he will go to in order to build a business unlike any other.  Peaky Blinders’s main character, Tommy Shelby, is played by the brilliant Cillian Murphy.  Tommy came back from the First World War suffering from PTSD.  His family and the rest of the gang are as violent as they are lovable. This is what makes the show.