Where is James bond Filmed?

Where was Thunderball filmed?

The Scrublands clinic where Bond met Count Lippe was filmed at Chalfont Park House in Buckinghamshire England. A number of luxury cars including Bond’s Aston MartinDB5 can be seen at the front of the building in the scenes: After leaving the clinic Bond gets into a car chase with Lippe and this chase scene was filmed at Silverstone Circuit.

An English 18th century coaching inn (The Royal Saracens Head) located in Chilterns Buckinghamshire was used for the hotel where Major Derval stays.  This location can be visited on our James Bond Film Location Tour.  Another location on that tour is Scrublands and Bond’s London home.

The Junkanoo parade was filmed on Bay Street in Nassau, Bahamas including the scene where he first meets Largo and Domino at Cafe Martinique. Some of the underwater scenes, such as the love scene, was shot at Clifton Pier. Other scenes were shot in the Exumas, West Providence Island, and Paradise Island.

Where was goldeneye filmed?

The 1995 Bond film Goldeneye was directed by Martin Campbell.  It was filmed in a number of locations including Switzerland, France, Puerto Rico, Russia and England.  Leavesden Studios in Hertfordshire, England was used for the studio work as Pinewood studios (the usual studio used) was not available.

The opening scene where we see Bond jumping off a dam was filmed at the Contra Dam, an arch dam on the Verzasca River in the Val Verzasca of Ticino, Switzerland:

Monte Carlo in France was used for all the casino scenes and the Tiger helicopter’s demonstration.The climatic satellite filming scenes were shot at Arecibo Observatory in Puerto Rico.

Some of the England locations include Cambridgeshire, Hertfordshire and Surrey.  Some of the scenes in St. Petersburg were actually filmed in London.

St Petersburg in Russia was used for some of the filming but London and surrounding areas doubled up for many Russian locations. The Grand Hotel Europe is actually Langham Hotel in London. St Petersburg square was actually Somerset House on the Strand. The airport where Bond meets Jake Wade is the Queen’s Stand at Epsom Downs Racecourse, Epsom, Surrey.

The tank chase was filmed in the Leavesden studio.

Where was Spectre filmed?

The spectre filming locations include England, Italy, Austria, Mexico and Morocco.  The 2015 film staring Daniel Craig as Bond was the 24th James Bond film and was directed by Sam Mendes

The opening scenes were shot in Mexico city in Zocalo Square.  They were filming in Mexico for a couple of weeks and the Square was closed during this time.  You can see the beautiful Cathedral in the background of the  festival scenes:

A lot of filming happened in London.  Spectre London scenes include boat scenes on the River Thames,  the staircase of the City Hall, Westminster Bridge, Covent Garden, Camden, Notting Hill, Millenium Bridge and Southbank. Fictional Rome location Palazzo Cadenza was actually Blenheim Palace in Oxfordshire. Her Majesty’s Treasury served as the location when Bond meets M (Ralph Fiennes) in his office.  The courtyard scenes with Miss Moneypenny were actually in the parking lot of the the Treasury.The Austria Spectre locations include the Solden ski-resort in the Ötztal valley of Tirol where the luxurious  ICE Q Restaurant doubled up as the private medical clinic.  The action shots where bond crashes the plane were filmed in the village of Obertilliach.  They dismantled  a barn in Styria and reconstructed it on the ski slope of East Tirolean.  The Ötztal Glacier Road was used for scenery in an action chase sequence.  The lake he crosses by boat is Lake Altaussee in  Liezen which is also where Mr Whites log cabin is located.  (on the north-east shore of Lake Altaussee).

A lot of the Italy filming locations was near the Colosseum, the banks of Tiber River and around the streets of Vatican City, Rome.   The funeral scene was shot at the Museo della Civiltà Romana (Museum of Roman Civilization) in Piazza Giovanni Agnelli, Rome.   The scene where Bond goes back to the house of Monica Bellucci  after the funeral was filmed at Villa Fiorano which is just outside of Rome. The car chase scene went past the Vatican, in Via della Conciliazione.  The beautiful old Roman bridges we see on the car chase scenes were located around Ponte Sisto, Ponte Sant’Angelo and Ponte Mazzini.

Where was Skyfall filmed?

At the beginning of Skyfall we see Bond chasing an agent through Eminonu Square in Istanbul Turkey.  The chase continues through the city of Adana which is close to the border with Syria. The location where Bond falls from the railway viaduct is the Varda Bridge in Kiralan, Turkey.  The scenes of him at a beachfront shack were on Koca Calis Beach, at Fethiye, a coastal town in the southwest of Turkey.

M’s house is London is 82 Cadogan Square. In many car scenes M passes Parliament Square in London.  Mi6 headquarters can be seen near Vauxhall Bridge.  The Mi6 training ground shots were filmed in the Old Vic tunners under Waterloo Station.   Bond’s hotel pool in Shanghai was actually filmed in The Virgin Active pool in London’s Canary Wharf.  Another location which was supposed to look like Shanghai was Broadgate Tower which is in London’s main financial district.  A couple of tube stations featured when seen running after Silva, Temple Station and Westminster tube station. The scene where Bond meets Q was filmed at the National Gallery  in Trafalgar Square.

The beautiful scenes of route to Bonds childhood home were filmed in Glen Etive, Scotland:

We are also asked where is the skyfall house, however the Skyfall House was custom built for the film on Hankley Common near Elstead in Surrey, England. Other scenes were shot in Glen Coe. Other scenes of Bond driving the Aston martin were filmed in the Highlands on the A82 near mountaina  Buachaille Etive Mor and Buachaille Etive Beag.

Where was Casino Royale filmed?

Casino Royale was the first Bond movie to feature Daniel Craig back in 2006.  It was directed by Martin Campbell.  Casino royale locations include Italy, Czech Replublic, Bahamas and England.  The studio work was again done at Pinewood Studios in Buckinghamshire England but some in Barrandov Studios in Prague.

Nassau in the Bahamas was used for a number of sunny locations.  Where Bond chases bomb-maker Mollaka to the ‘Nambutu Embassy’ was Naasau.

Where you see M at the the ‘House of Commons Committee Room’, this was not London but the : Philosophical Hall, Strahov Monastery Library in Prague.  You can visit the library as its open daily to the public.  There is also a 3D tour on the website here: https://www.strahovskyklaster.cz/en/

Bond and Vesper visit Hotel Splendide.  The actual exterior of the hotel was the Grandhotel Pupp in Karlovy Vary in the Czech Republic.

The film gets more real when Bond stays in the Bahamas as this was actually Nassau, Bahamas.  He stayed at the ‘One and Only Ocean Club’ Nassau.  A number of scenes were filmed in and around the club.   After Bond causes some damage in the parking lot, he goes to the lobby where he finds out that it is Alex Dimitrios who received the sms sent by Mollaka.   The short poker game against Dimitrios in the Library can be found just off the lobby.  Bond takes Solange to his sea view villa at the resort before making a hasty exit. The actual villa is available for rent and more information about the whole resort can be found here: https://www.fourseasons.com/oceanclub/

The beautiful gardens of Villa del Balbianello in Italy is where Bond rests up after being tortured by Le Chiffre.  The villa and gardens belong to the national Trust of Italy and the public can visit: 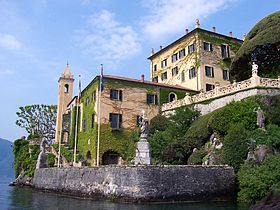 Another Italy location was in Palazzo Michael in Venice.  Towards the end of the film Bond tracks Vesper to a building in Venice.  The building is undergoing renovations and after the gunfight, the whole building collapses into the water.   Hoever it was all CGI as the collapsing building scene was filmed in Pinewood Studios.  So the Palazzo Michael is entirely intact for those that would like to see it.

Where was Goldfinger filmed?

The 1964 film Goldfinger starring Sean Connery and directed by Guy Hamilton was filmed in Florida,  Kentucky, England and Switzerland.

A lot of the Goldfinger filming locations was done not far from Pinewood  Studios in Buckinghamshire, England. The so called ‘South American holdings’ were actually a storage tank complex at Stanwell, west of London. Where the Merc falls over the cliff is actually Harefield Quarry.  The ‘Blue Grass Airfield, Kentucky’ was actually RAF Northolt Aerodrome in west London.  This aerodrome  was also seen in Thunderball and Octopussy.  The golf match between Goldfinger and Bond was Stoke Poges Golf Club in Buckinghamshire not ‘Royal St George’s, Sandwich’ in Kent.

You briefly see a shot of the real Fort Knox in Kentuckym however the fort was recreated at Black Park Woodland behind Pinewood studios.

The golf match between Goldfinger and Bond was Stoke Poges Golf Club in Buckinghamshire not ‘Royal St George’s, Sandwich’ in Kent.

You briefly see a shot of the real Fort Knox in Kentuckym however the fort was recreated at Black Park Woodland behind Pinewood studios.

The beautiful scenery where you see Bond being chased by an impatient lady in a white Mustang is Furka Pass in Switzerland: 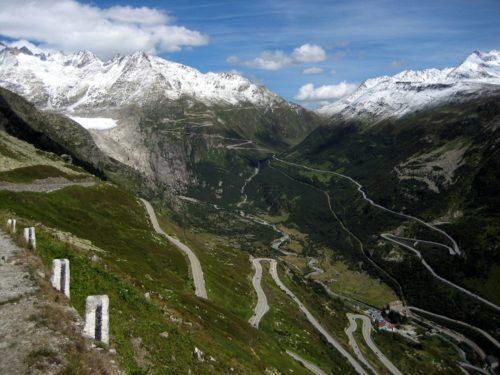 The shots of ‘Auric Enterprises’ are the Pilatus Aircraft Factory in Switzerland.

For those visiting the UK we have a number of James Bond Tours and Events.  All of our tours can be found on the page below:

We also have a number of ‘an audience with’ events where you can meet a James bond star.  Follow the link below to see all the upcoming private meetings with an actors/actresses or production members from the James Bond franchise.