Our first Peaky Blinders tour with a visit to Tommy’s mansion when ahead recently and the sun was shining brightly on us all. It was one of the hottest days of the year, but we all stayed calm and collective thanks to the air conditioned coach.  It was a completely successful day and everyone had a fabulous time, the first of many.  Lifelong friendships were made or at least online social friends.  There was a slight buzz because one of the chaps (my son) looks a bit like Tommy Shelby himself.  Everyone wanted to take his picture at the locations which we both found amusing.  He was like a celebrity for the day. Had the weather been a bit cooler we would have dressed him up in the full outfit, but it was just too hot. He has since got a few new followers on social media. 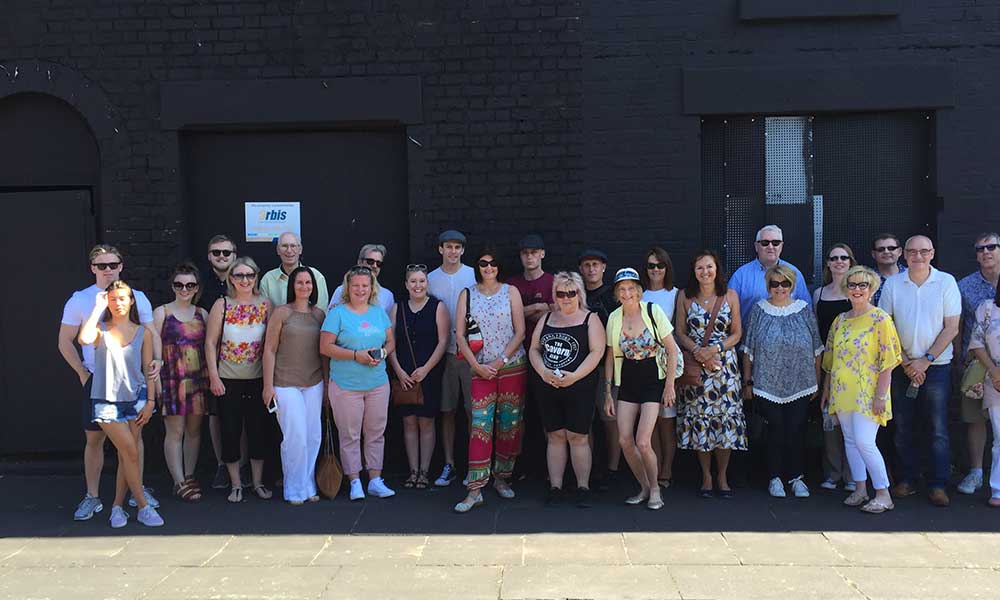 The tour guide was great and he gave us lots of anecdotes which got us all giggling.  He pointed out the monuments and buildings which have some interesting history.  It was great to see the street where the Shelby family lived in series 1 and 2. The area is in Toxteth’s Welsh Street area, where all roads have Welsh names.  Today row after row are derelict and in disrepair. The actual road of houses used in Peaky Blinders (Powis Street ) was secured for filming and painted black.  This was the first stop where we got off and could take a walk around.  You can read more about my experience on this Peaky Blinders Tour here.

The tour is a great way to see some of the beautiful architecture which Liverpool has to offer as well as meeting likeminded fans of the show.  I found it really enjoyable driving from location to location and seeing some of the Georgian and Neo-Classic architecture.  The Georgian houses are beautiful, the Victorian buildings stunning.

Liverpool’s origins date back as far as the 11th century, with the earliest building probably being Liverpool Castle.  There are a couple of Tudor and Elizabethan buildings in Liverpool today.  Speke Hall is a Grade I building and a popular tourist attraction in Speke, owned today by the National Trust.  Also Croxteth Hall is the other building from that era which is well worth a visit.

There is some Stuart architecture in Liverpool with Woolton Hall being a fine example.  It is a grade I listed manor house south of the city.  Tuebrook house is probably the oldest from this era and was built in 1615 as a farmhouse.  Today owned by a local family so you cant go inside, but you could do a drive by, its found on 695 West Derby Road.

The 17th century and the expansion of the port brought lots of wealth to Liverpool.  This was the time when Georgian houses began popping up, with many still preserved toay.  Liverpool Town Hall was designed by John Wood the Elder and today is a fabulous example of Georgian architecture.  Rodney Street is known as the ‘Harley Street of the North’ due to the number of doctors living there.  It’s a stunning example of Georgian architecture and today these buildings fetch a high sale price.

Neo-Classic architecture is in abundance today in Liverpool. A number of neo-classical buildings can be found around William Brown Street.  It has been labelled the city’s “Cultural Quarter” and houses the town’s central library and museum.  St Georges Hall on Limes walk is another great example of this era and it’s where we meet for our Peaky Blinders Tour.

So if you are a fan of Peaky Blinders and want to visit the locations up close and see some of the great architecture Liverpool has to offer, why not book a tour with us today. We offer a 4 hour Peaky blinders tour which takes you to Powis Street which was the home of the Shelby’s before they hit the big time. You can also see the outside of Polly’s home and the waterways museum used as Camden Town in the show and much  more..  The tour costs £30 per person and is run on Sunday at 9:30am on the following dates: 16 & 30 July, 20 August, 17 Sep, 1 & 22 October.  If you want an all singing and dancing tour why not book our Peaky Blinders Tour plus Tommy’s Mansion.  You see all of the locations but the highlight is to take a stroll around Tommy’s mansion.   This tour costs £60 and is taking place on 13th August.  Next year the tour runs on 1st April, 17th June, 15th July, 19th August.   We keep tour groups to a maximum of about 30 so everyone can hear the guide and enjoy the day.  We also can arrange private tours so get in touch if you want to have your own private group tour.

Click here for more details and to book our 4 Hour Peaky Blinders Tour.

Click here for more deails and to book our 9 hour Peaky Blinders Tour with Tommy’s Mansion.